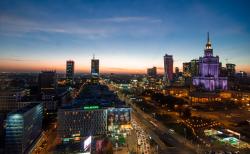 Poland – all one needs to know. Poland is the country located in Central Europe. It borders with Germany in the west, Slovakia and Czech Republic in the south, Belarus and Ukraine in the east, Russia and Lithuania in the north-east. The capital of Poland is Warsaw, which is situated in the central part of the country. Polish is the official language and it belongs to the group of Slavic languages. The population of the country is estimated at 38 million, 90 % of which is Catholic. Since 1st May 2004 Poland has become a member of the European Union, however the currency has not changed. In Poland one can only pay with złoty. Poland is a parliamentary democracy, which means that all citizens participate in ruling the state. Andrzej Duda is the current president.

As far as administrative division is concerned, there are 16 voivodeships, however it is easy to observe how ethnically and culturally various zones they create. That is why in some regions there are dialects and the cuisine slightly differs from one another e.g. people called “górale” from the southern part of Poland. Thanks to its landform, Poland can offer basically every type of “natural attractions” starting from the Baltic Sea in the north, through Masurian Lakes to the mountains in the south namely High Tatra (the highest peak Rysy 2,499 metres), Beskid, Karkonosze, Góry Stolowe and Bieszczady. Moreover, for those who are fascinated by the wild nature there are 23 National Parks spread all over the country. One can find ideal place for mountaineering, sailing or sunbathing on the beach. City tours enthusiasts can also find a plethora of must-visit cities like Warszawa, Wrocław, Kraków, Gdańsk, Toruń or those extremely important in terms of polish history like Oświęcim - the place of the largest Nazi extermination camp during the World War II.

The country offers a wide range of international airports with cheap airlines. The most popular ones are: Warsaw Modlin, Cracow, Gdańsk, Poznań, Łódź, Katowice and Wrocław. When travelling within the borders there are two alternative ways, as either one can choose buses or trains. The most popular means of public transport in the cities is the bus. As far as the prices are concerned, students are provided with the 50% discount for trains and the public transport. Though in some cities the tickets bought in the buses can be little bit more expensive than the ones from ticket machines.

There is a particular time in a year which all polish students are waiting for and it is a yearly student carnival called “juwenalia”. Every May and June just before the end of the summer semester all academic cities and towns are inviting Polish and International music stars to perform. All of the concerts tend to be open air events for free.

The only thing to do is to try it on one’s own.